Parq’s distinctive identity achieves a timeless elegance as it reinterprets the contrasts of Vancouver’s breathtaking landscape. With its unique and sophisticated features, the complex invites residents and visitors in its urban oasis, a place where they can experience a multitude of atmospheres. With Architecture 49 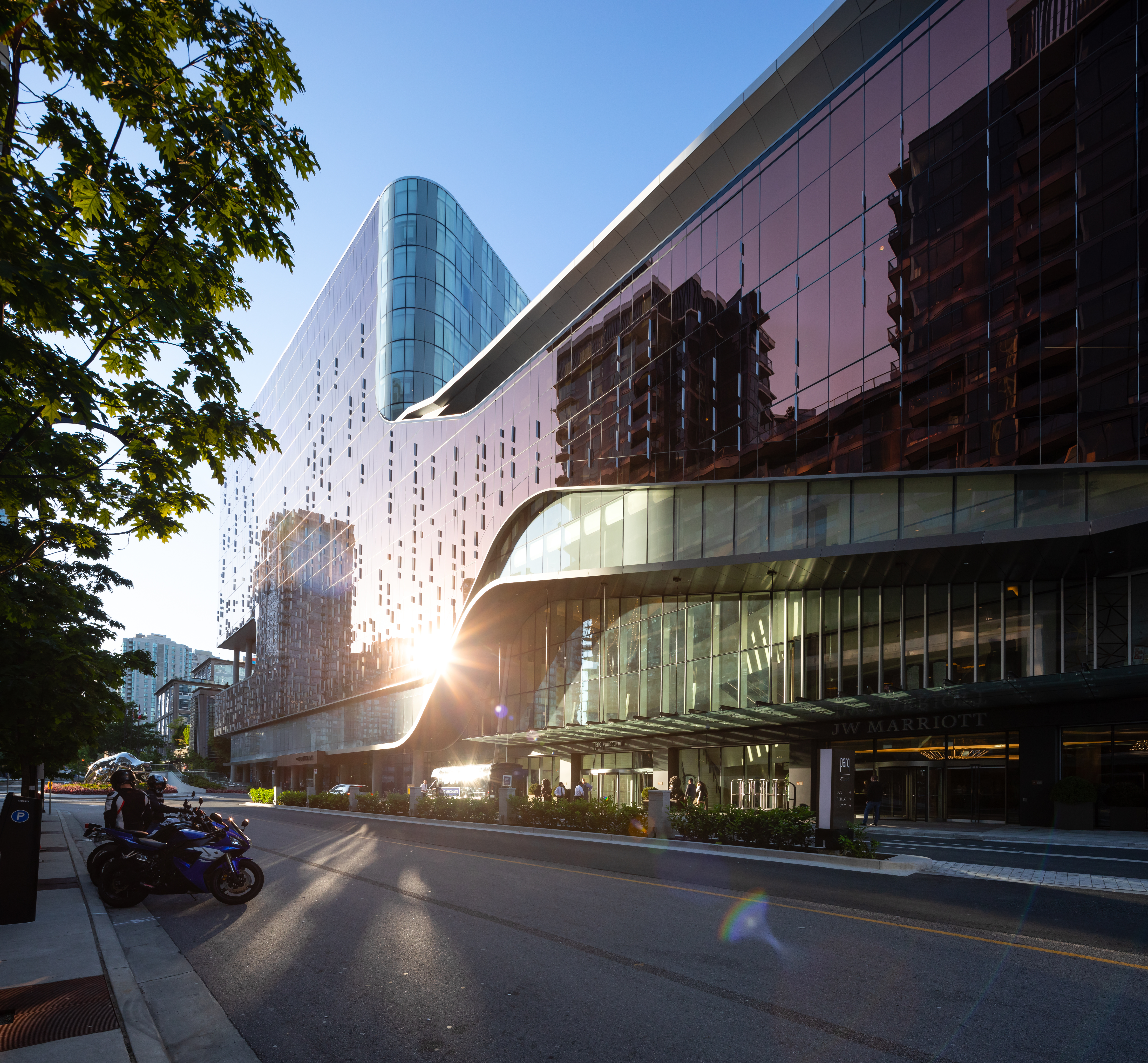 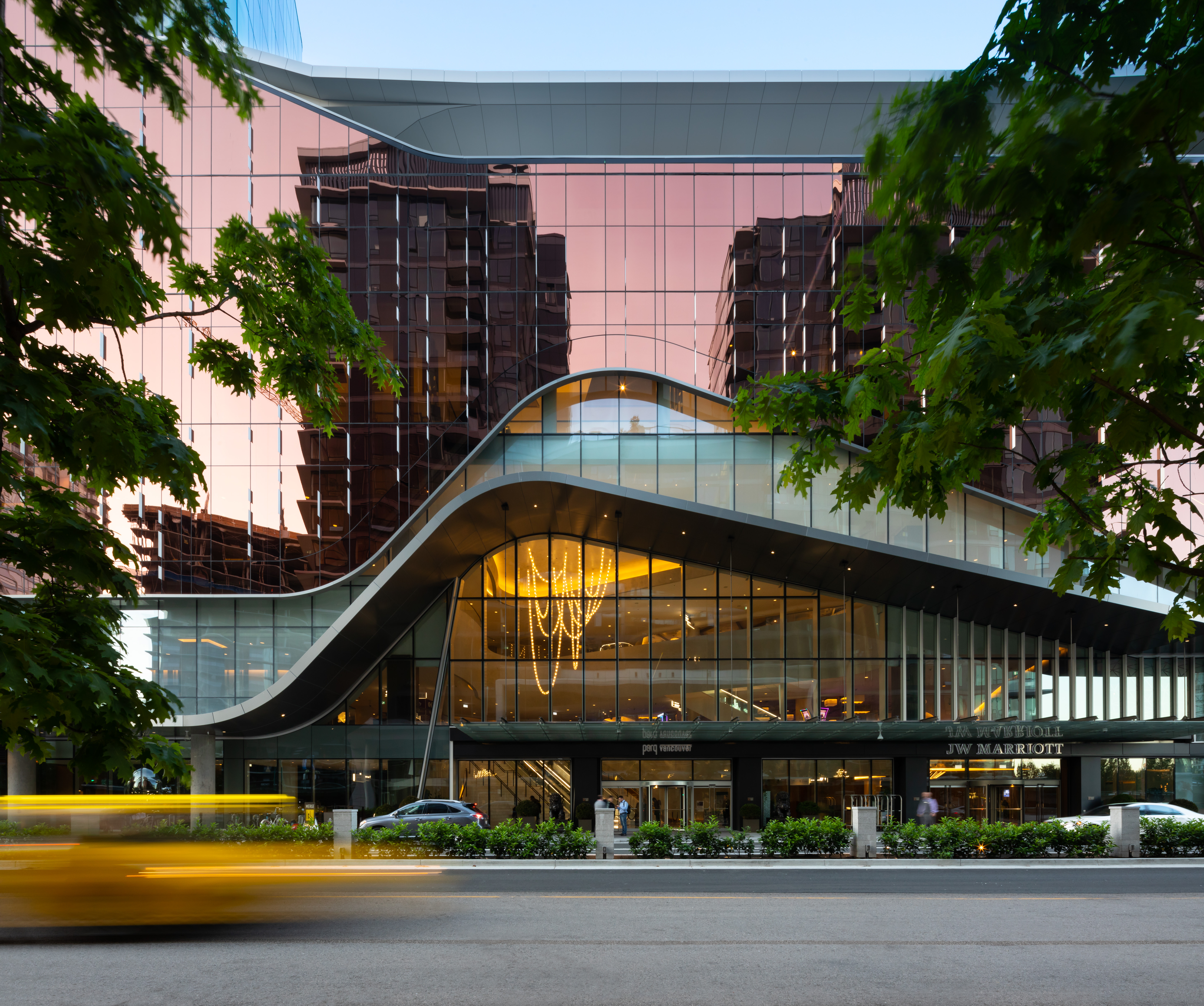 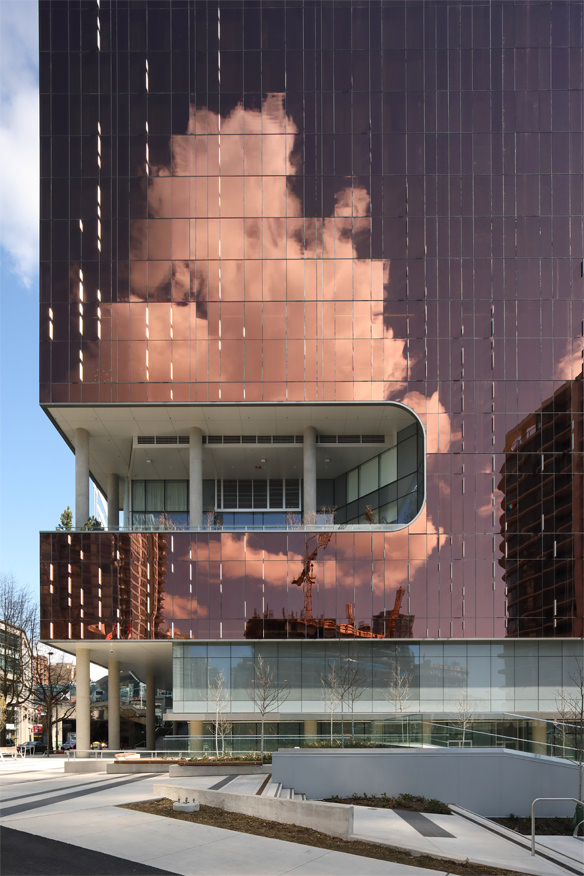 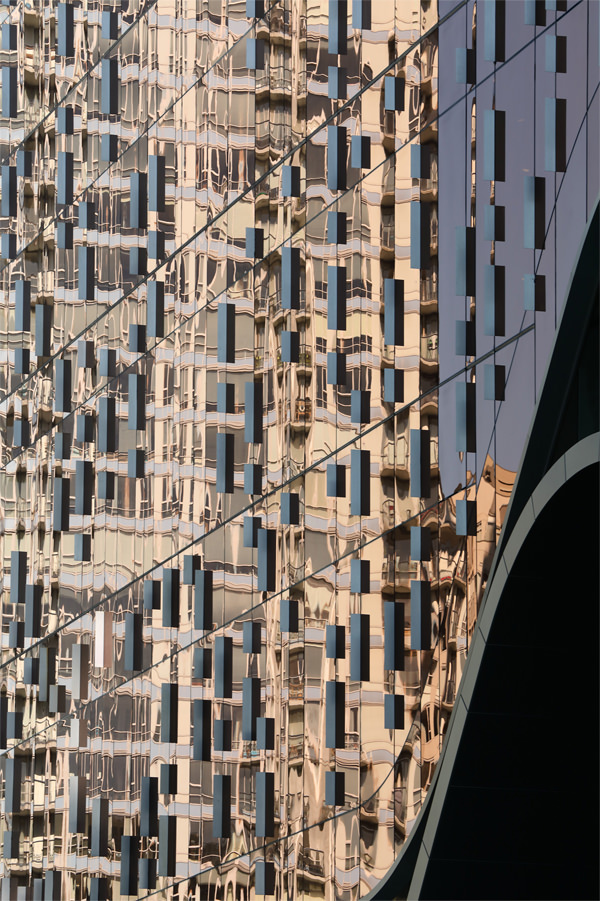 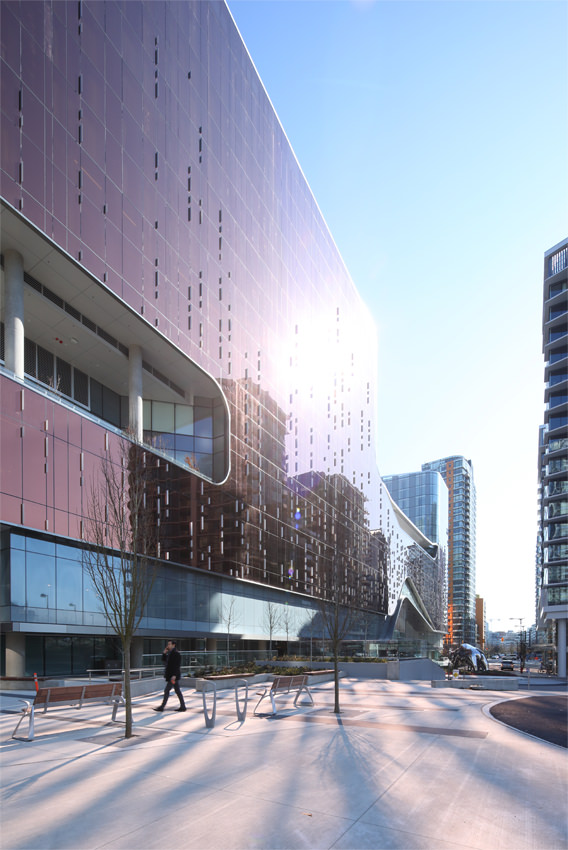 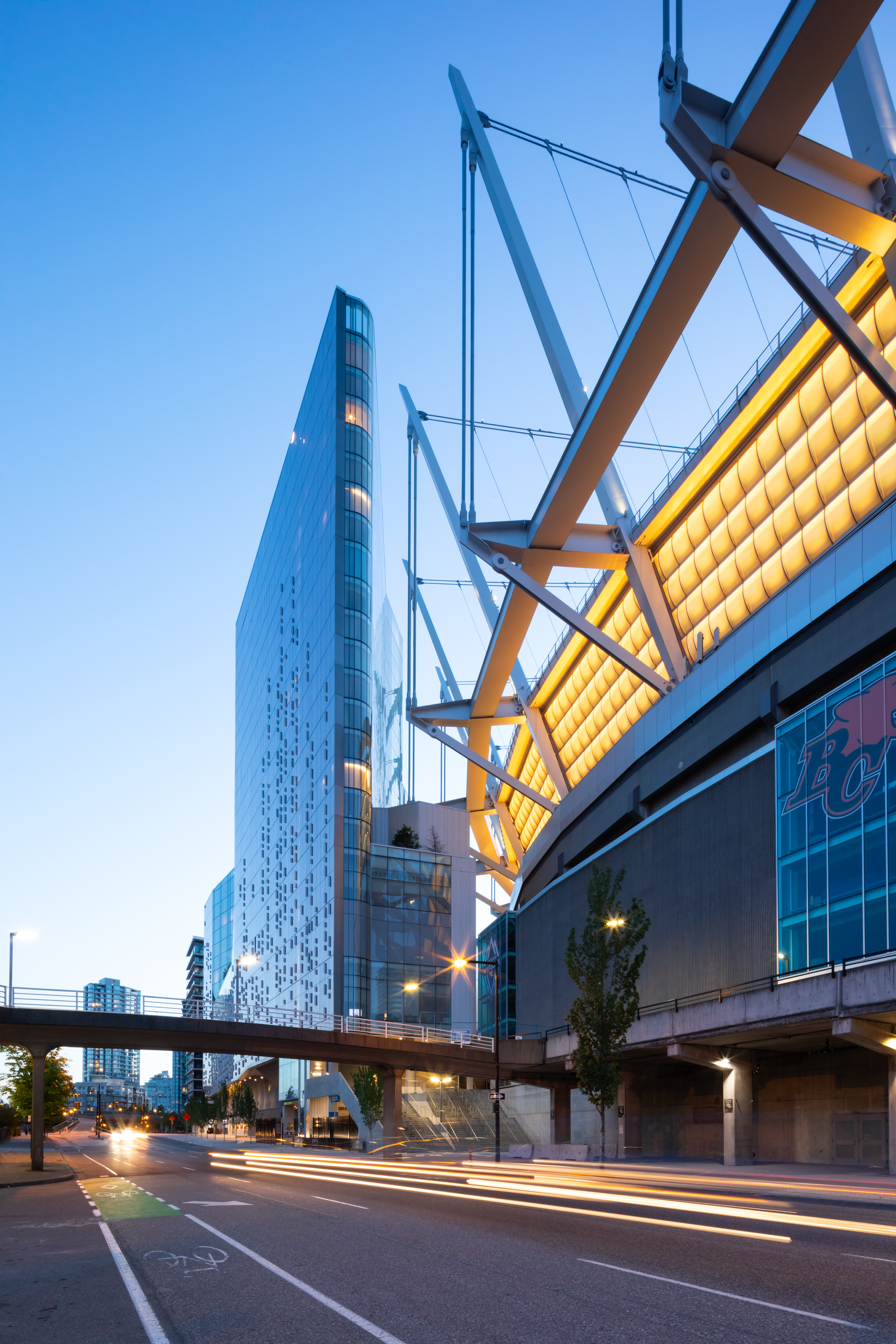 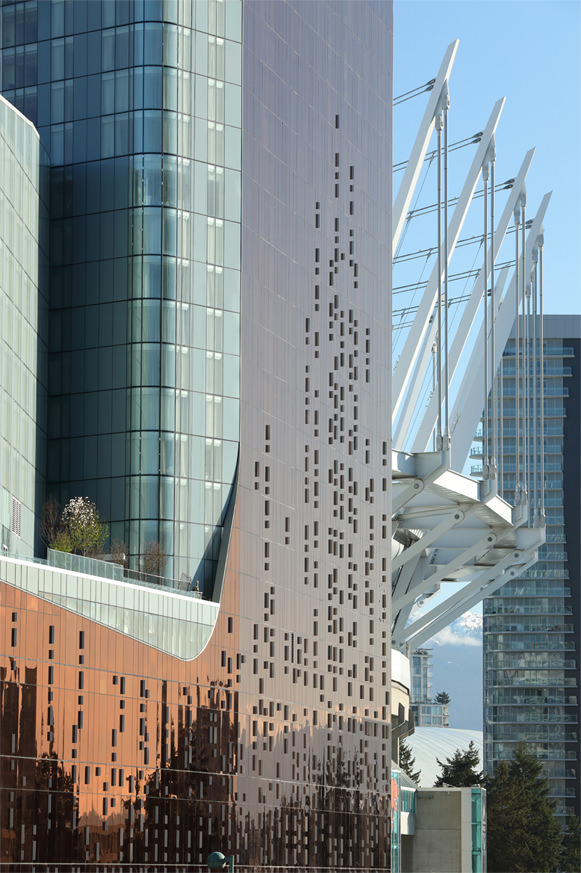 Located in Downtown Vancouver, Parq takes part of the development of BC Place Stadium’s neighbouring lot. The complex – a mixed-use building originally designed by ACDF – is at the core of an emerging entertainment node in the city. It houses a casino, two luxury and lifestyle hotels, eight restaurants, a fitness centre, a spa, numerous meeting and reception rooms, as well as an elevated park located on the sixth floor.

The architects chose a simple carved shape embracing the site’s footprint that would complement the emblematic architecture of the stadium. The result provides an important landmark to the city, which also acts as a transition between the stadium and the surrounding smaller scale buildings. With its carefully fragmented massing, the complex blends fluidly into its environment and displays eye-catching layers.

With its cliffs, gorges and valleys, the city’s backdrop is reflected through the fluid form and the dynamic composition of Parq Vancouver. An earth tone shimmering curtain wall adorns the façade. Metallic louvers are incorporated to the façade, following a pattern made from a pixelated image of the mountains. The louvers capture the changing sunlight and evoke sun glitter dancing on the neighbouring Pacific Ocean.

The rectilinear lines bend inward to form the inner façades. Clear glass, opalescent white and round shapes engage with the stadium’s bold curves. Slopes converge towards a lush green space, where the calming atmosphere of an alpine environment surrounds the visitors. The elevated gardens contribute to the sustainable aspect of the project and show an innovative use of green spaces, seamlessly introducing nature into a refined urban environment.

On the second and third floors, the casino receives plenty of natural light, while the commercial spaces on the ground level showcase an animated interior. The oversized windows entice the passerby into the complex and connect the inside with the city’s streets. The outdoor spaces of the building also increase pedestrian flow and provide a precious link to the existing bicycle path network.

Due to its synergy between the different programmatic components, Parq Vancouver offers an environment where a wide variety of activities and atmospheres coexist. Built to meet LEED Gold Standards, the entertainment complex also pays homage to Vancouver’s natural setting and protects spectacular mountain views.